Christian Kroeber is Co-Founder & CEO of wehorse, a brand of welearn GmbH. wehorse is Europe’s leading streaming education provider for equestrians, and now has users in over 40 countries around the globe, including an expansion into North America.

Born in Germany, Christian has a distinguished background in both entrepreneurship and equestrian sports. Having successfully competed in Dressage and Show Jumping on a national level, he has been deeply rooted in the equestrian world from early on. For example, his father founded EQUITANA, the Equestrian Sport World Fair, in 1972.

Christian shares the passion to connect horse-lovers globally and push the frontiers of technology and education. He pioneered the concept of online equestrian education by transforming the former company “pferdia TV” from a DVD-based e-commerce site into wehorse, the equestrian education and video streaming platform we know and love.

Christian continues his involvement in the sport as moderator and host of major equestrian events such as EQUITANA, World Cup Events, the German Championships in Dressage and Show Jumping, and many more. 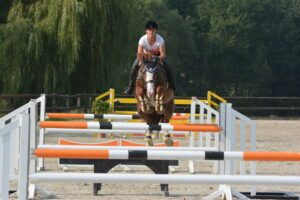 Preparation is half the battle – this also applies to jumping courses. Just going for

Lunging Horses According to the Various Philosophies

If you are concerned with lunging your horse correctly, you will quickly encounter dogmatic disputes. With side reins or without, on the bit or not, with a bridle or a cavesson? 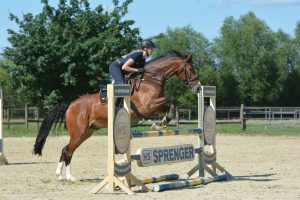 4 Preparatory Exercises for your Jumping Horse

Preparation is half the battle. This also applies to jumping exercises for horses. It is much more fun, and much safer for horse and rider, if you prepare yourself step by step and grow with your tasks.

A horse bucking because he feels good is one thing but bucking under saddle is another, ranging from fairly harmless little bunny hops to terrifying bronc shows.

The School of Légèreté: What Makes it so Special?

A dressage philosophy that emphasizes lightness. What do Philippe Karl and his students do differently?