Nothing in life illustrates the human condition more profoundly than a person’s resilience—an individual’s ability to overcome the adversity they meet over the course of their life with grace; with fortitude. This resilience requires grit, requires determination and hard work and endurance, and it is those very same traits that are exemplified in the performance of the endurance horse.

What Exactly is Endurance Riding?

On a fundamental level, the word endurance is defined as an individual’s ability to exert itself and remain active for long periods of time despite fatigue, stress, or other adverse conditions. Thus, endurance takes ability and pushes it one step further by requiring that one’s ability be sustained over long periods of time. This, in effect, raises the bar significantly as far as degree of difficulty is concerned and it is at this degree of difficulty where one will find the sport of the endurance horse.

The discipline of Endurance is one of many that falls within the compendium of Equestrian Sports. Each practice, each specialty is characterized by its own culture, by its own set of expectations and regulations, and Endurance riding is no different.

As indicated by its name, the heart of endurance competitions lies upon the element of long-distance. Endurance is a long-distance sport that hosts competitions that take place in a vast array of different regions with varying altitudes, landscapes, and subsequent weather conditions. Fitness, stamina, and endurance are all tested during these competitions that can range anywhere from 50 to 100 miles, 40 to 160km, with 50 miles being the most common distance riders are tasked with covering. This task is not one that is naturally suited for all breeds.

Each Breed to their Own: Which Breeds Dominate the Discipline of Endurance?

Per FEI regulations, all breeds are allowed to compete in the discipline of Endurance, however there are a few breeds that stand out as top competitors within the sport itself. The most common endurance horse seen at high-level competitions is the Arabian, well-known for his ability to be able to cover vast distances with ease. Also seen at the competitive level are breeds like the Thoroughbred, the Akhal-Teke, Cross-breeds of the aforementioned horses, as well as the Criollo and the Hanoverian, though it is not entirely uncommon to see Mustangs or Quarter Horses on the trails. With that said, horses and riders of all ages, colors and sizes are encouraged to compete, so it would be incorrect to think of the discipline of endurance racing as one that is exclusive to only a few different types of endurance horses. With the right approach, and careful training, nearly any horse can be developed into a fun and competitive endurance horse that can bring years of enjoyment to his rider.

Before you Ride, Safety First!

Like all equestrian sports governed by USEF, safety is of the utmost importance; the safety of both the horse, as well as the safety of the rider. Prior to competition, horses must be registered with the FEI and must pass an FEI-approved veterinary checklist indicating that each prospect has been individually approved and deemed fit for competition.

Further, during the competition itself, competitors must stop at mandatory stations where their horses will be vet-checked to ensure that each horse has been deemed fit to continue. To determine this, veterinarians will check for any contusions, swelling, or other signs of physical duress, but most importantly, the horse’s pulse will be gauged.

To be deemed fit to continue, each horse’s pulse has to be checked and considered “recovered”, according to the FEI’s guidelines regarding pulse criteria, to be allowed to continue. The competitor’s hold time starts after her horse’s heart rate is officially down to criteria, which is typically set at a rate of 64 in the pulse box.

The respective veterinarian working each station will check each horse’s metabolic status and soundness prior to the competitor being allowed to continue. Each rider must then wait until the full time has elapsed, typically thirty minutes, though he or she may stay to rest longer if they so desire. These very specific regulations then govern the type of training program one must utilize in order to effectively prepare for such a competition.

As indicated by the strict guidelines set forth by the FEI, Endurance riding is not something a horse and rider can simply jump into. To develop the endurance horse, careful consideration and months of training and preparation are necessary to prepare the pair for this challenging enterprise. But that is not to say that it’s impossible.

Perhaps the simplest component of this training regimen relates to regularity. Endurance horses must be given meaningful, stimulating, daily exercise to physically prepare their bodies for the task of covering such a vast distance. Engaging prospects in daily anaerobic exercises helps to prepare their bodies, and their hearts for such a competition. Given that their heart rates are closely monitored, it is essential that they are in excellent physical shape to ensure their heart rate will be able to meet the requirements necessary to be approved for competition.

The process of preparing the endurance horse is much the same as the process one would undertake to prepare for a marathon. Naturally, horses will need to have a solid foundation upon which to place this new training. They should have undergone extensive groundwork training and should have many miles on them as far as experience carrying a rider, but trainers need not overthink the complexities of the training process.

Essentially, endurance is a test of a horse’s ability to cover an exceptionally long distance in a single period of time. As a result, all trainers need do is provided consistency as far as daily exercise and then gradually build upon the demands. Perhaps the rider begins by asking the horse to jog for five minutes before allowing them a cool-down period with which to bring their heart rate back down. Then, the next day, the trainer asks the horse to trot for six or seven minutes straight prior to allowing them to walk and cool down, dropping their respective heartrate.

The training itself should not be overthought, as the physical demands will require enough focus and attention of the pair. The most important thing to remember in all of this is the health and well-being of the endurance horse. It is essential that the endurance horse in training is closely monitored at all times to check for heavy or labored breathing or irregularity in the gait as these would be signs of overworking the animal, as would any swelling or bruising. Like any interactions with our horses, horsemanship demands that the needs of the endurance horse supersede all other focuses. Preparing the endurance horse is no exception.

Tools of the Trade: Fitting the Endurance Horse with Tack and Equipment

Competing in endurance does not require any special equipment per say, though there are guidelines set forth by the International Federation of Equestrian Sports, or the FEI (Fédération Equestre International) that must be observed in order to fit the endurance horse for competition.

Philosophically, those rules and regulations are dictated by an emphasis on the well-being of the animal, as that is a value maintained by the organization as being of the highest priority.

The FEI provides relatively liberal guidelines for approved tack and equipment used with the endurance horse, considering the arduous nature of the competition itself. The Federation’s Handbook discussing regulatory expectations within Article 810, and is cited as follows:
In principle, there is no restriction on saddlery however it must be in safe condition and fit the Horse. Any type of rein that may unduly restrict the free movement of the head of the Horse, including, but not limited to Draw (Running) Reins/French Reins are forbidden.

These guidelines, again, merely serve to emphasize the care and comfort of the animal during the ride, though a few components should be carefully considered, as well as present, prior to the beginning of the competition:

Similarly, to the guidelines developed by the Federation for horse-approved tack, there exist few regulations regarding the attire to be worn by the rider. The FEI forbids the use of any artificial equipment during the ride, such as whips or spurs, but is relatively lax on their expectations for rider apparel. The one key element that must be present for permission to compete involves the use of a -approved riding helmet. This will be something that will need to be worn during check-in, as well as during all lengths of the competition at large.

In the Spirit of Adventure: A Partnership Like No Other

Fewer things illustrate the capacity of a horse’s spirit greater, more profoundly, than his fundamental endurance. Over the spans of history, we have seen horses exploited, overworked, disregarded, and discarded like mere objects of possession. Fortunately, over time, humanity has come to develop and appreciate a notion of the horse that seeks to do him justice, to honor his role and legacy in the history and advancement of mankind.

Horsemanship has become something all good equestrians strive for—a journey that never truly ends, but one in which each of us continue growing, continue learning with one of our closest friends and partners in life. Endurance racing only works to further develop that relationship, and works to illustrate the lengths we can go with our equine friends, if only we have the will, and the endurance, to set forth on an adventure like no other.

10 Exercises for Improving your Riding Seat

“One of these days I’ll have to do something about my riding seat!” – who among us hasn’t thought this? Simply starting will help considerably.

Flying changes are either inevitable in the jumping course or the next step to a more advanced dressage level. Either way, it is a wonderful feeling for the rider when the horse changes leads in canter by jumping energetic and powerful into the new direction. 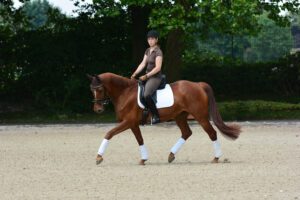 The basis for all riding: without flexion there is no bend, and without bending there

Great Things Come to Those That Groom: The Necessity of Grooming Horses

There is a unique serenity that one experiences when grooming horses; a certain quiet, a certain calm. For many of us, this can be the most relaxing part of our day. 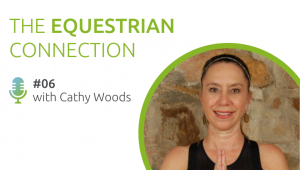 Cathy Woods created the unique concept “Body, Mind, Equine”. This program focuses on the use