Driving: Our History, Our Story, Our Future

We often take for granted the ease with which we are able to jump into our cars and travel virtually anywhere. Prior to the advent of the automobile, these impromptu visits were an impossibility. So, how did people move from point A to point B, and what, if any, does this practice look like today?

The History of Driving and the Role Played by Driving Horses

Knowing exactly when driving horses were first placed in harnesses remains an impossibility, however, historians theorize that this method first took place sometime in 2,500 B.C. in the Middle East. One topic of controversy that remains involves whether or not driving horses initiated our relationship with the horse, or whether horses were first ridden under saddle, with evidence existing in support of both sides of the argument.

Regardless, historians know that this is the correct era in which humans first utilized driving horses and their respective equipment. As far as application, there were numerous uses for driving horses. Simple transportation was one such use, however, both horse and carriage, or chariot, were used during times of war, as well as the inclusion of driving horses in festivities and celebrations, and the implementation of driving horses for sporting and agricultural reasons.

Symbols of Status & Wealth: Use of Driving Horses in Every Day Life

16th Century Europe found driving horses and coaches rapidly becoming a popularized means of travel; signifying that the passengers had the financial means with which to travel in such a way. Medical practitioners also found purpose and efficiency in driving horses; being able to visit patients and travel more speedily to patients in a state of emergency.
Other simply called for a coach, utilizing driving horses even when the distance to their destination was limited; knowing that in doing so, they were communicating a very clear message to others in their social standing and ability to call upon what was, for some, a luxurious means of transportation; using driving horses even to simply travel to a local destination in town. 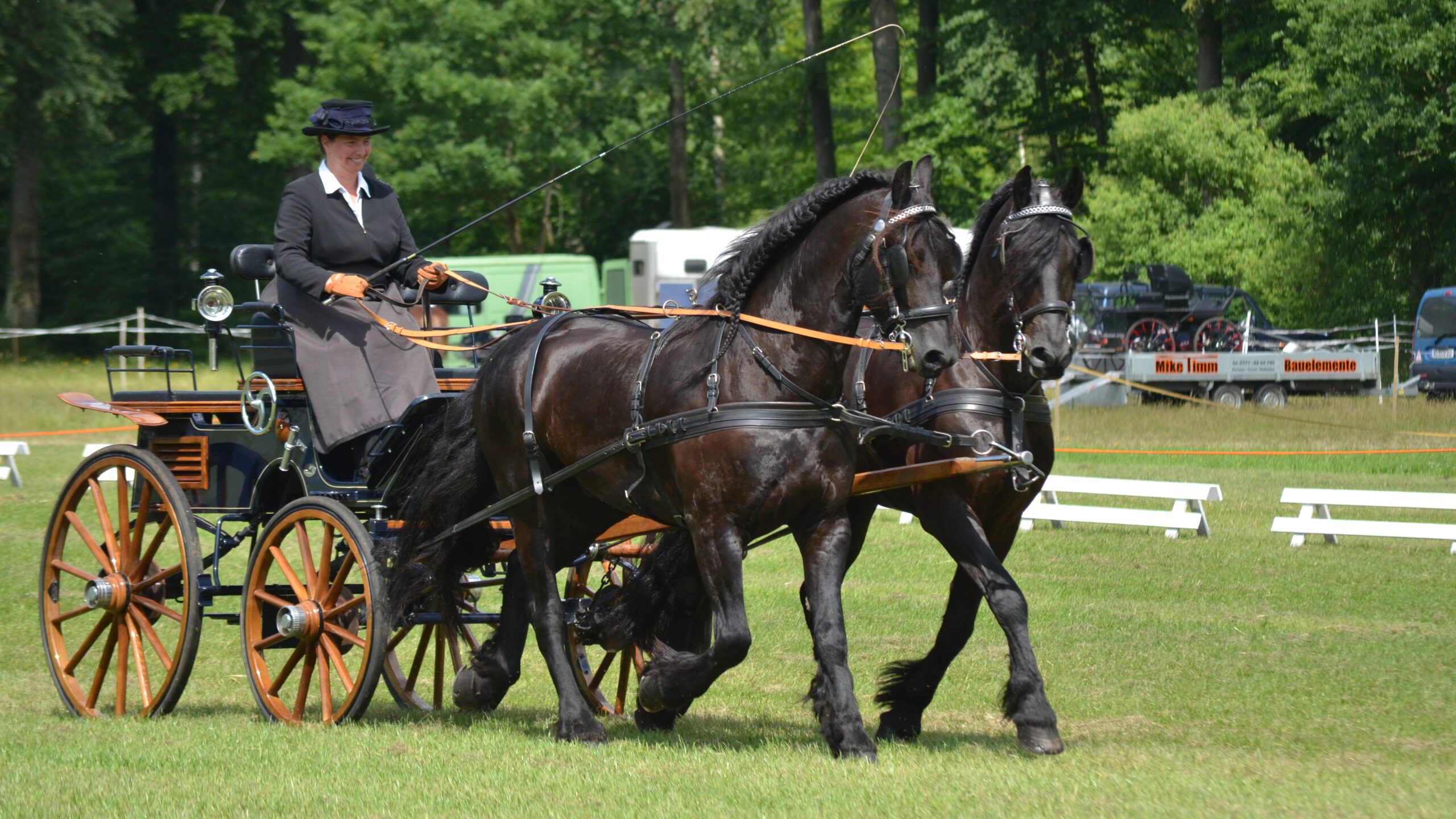 Driving Defined: What is Driving and How are Driving Horses Used?

By definition, driving is a relatively broad term that refers to any instance in which a horse, mule, pony, donkey, or other equine is hitched to a cart, wagon, carriage, sleigh, or other horse-drawn vehicle and utilized in such a way as to transport a person or item from point A to point B.

The Industrial Revolution had a drastic impact on the role driving horses played in everyday society, with more and more people utilizing automobiles and motorized means of both travel as well as moving items and goods to different locations.

The same industrialization worked to transform the agricultural world, as more and more farmers invested in mechanized means of planting, harvesting, and shipping crops and other goods, forcing horses into a more obsolete position.

As a result, harness horses found a more recreational purpose in the equine world, with many still appreciative of the function and purpose they served for years and striving to maintain the history and sport associated with harness horses.

Prince Phillip, at one time the Duke of Edinburg, was largely responsible for not only keeping the sport of driving alive, but also for the development of the international rules for the Horse Driving Trials, later earning the seat of the Fédération Equestre Internationale from 1964-1986.

The Father of Modern-Day Driving

Once almost exclusively devoted to the sport of polo, upon turning fifty years of age in 1971, the prince turned from polo to driving, having at his disposal a slew of antique carriages, horses, grooms, equipment, and land.

In the infancy of this career, the prince’s ability was relatively weak. His second competition was at the European Championships at Winsor in 1973, and upon completion of this race, he said only, “I came in not quite last. But, very nearly.”

As time progressed, so did his abilities, with him later going on to represent Great Britain in three European and six World Championships. It was his enthusiasm for the sport, and his reverence for the history driving horses played in the development of civilization that played such an influential role in maintaining the popularity of the sport and really keeping it alive.

Today, there are a variety of different types of driving competitions, including those where single drivers via for first place as individuals as well as the sport of combined driving.
Basic show classes involve nearly every breed, with some participants utilizing miniature horses and ponies as their driving horses during show; others the more elegant breeds such as the Arabian, Saddlebreds, and Hackneys, while others show the larger draft horses, using such breeds as Belgians, Clydesdales, Frisians, and Percherons.

A Sport Within a Sport

Further, there are several different types of driving competitions that all fall under the broader, more generalized category of driving. There exists a singles competition where an individual driver competes for sole ownership of the first place, carriage driving, harness racing, working harness, as well as classes for singles, tandems, pairs, and even a class that involves unicorns, or teams where drivers use a pair of horses with an additional horse placed in front of the pair.

There is also the discipline of combined driving, which functions much like three-day Eventing; focusing on the critical components of the sport and using those areas to judge each team’s individual performance.

Tools of the Trade: The Importance of Quality Equipment in Driving

Competitors will need very specific equipment to compete in combined driving, with the quality of such equipment being of the utmost importance to ensure the safety of both horse and driver. It is essential that teams invest in a high-quality harness that securely fits each of the horses or ponies that they will be competing with, a first-rate carriage that is sound and balanced, fine driving reins and whip to be used by the driver him or herself, as well as a groom that can aid in the navigation during the competition and help support the carriage throughout.

The Art of Combined Driving

Combined driving follows three phases, again, very similar to that of the sport of Eventing. Horses begin by completing a dressage test that gauges their ability and athleticism, followed by a cross-country marathon requiring them to navigate through a variety of hazards until reaching completion where each team successfully completes an obstacle test following a course marked with cones.

Speed and agility are of the utmost importance as each competitor’s time is noted as well as the ease with which teams are able to complete each individual phase. Combined driving is an internationally recognized competition, again largely due to the role of the Prince of Edinburg, and is a sport that tests each team’s stamina, athleticism, bravery, harmony, as well as the trust and rapport they have built-in one another. Watching the master team is much like looking at a fine piece of art; each one unique and each one demonstrating the beauty possible having fully developed a relationship and discipline.

Each One, A Gift

Each breed brings with it its own unique skills and abilities, though generally speaking there are a few characteristics that lend themselves more readily to the sport and when selecting driving horses of the most appropriate nature. Competitors ideally look for candidates that are calm, and even-tempered, but also candidates that demonstrate athleticism and a competitive nature. Drivers naturally always want to be in full control of their counterparts, but it is useful to have a horse that enjoys the sport and seeks always to do his or her best.

Although no longer practical, driving will forever remain a part of our history, our culture, and our identity, for having played such a quintessential role in human civilization. Enthusiasts worldwide celebrate the practice to this very day, competing in sports like harness racing and organizing events that allow harness horses to showcase their abilities.

Is it horse-friendly? Train your eye to recognize good horse training

It’s time to train your eye for horse-friendly training! There has been criticism of dressage for years, and not always without reason… All too often 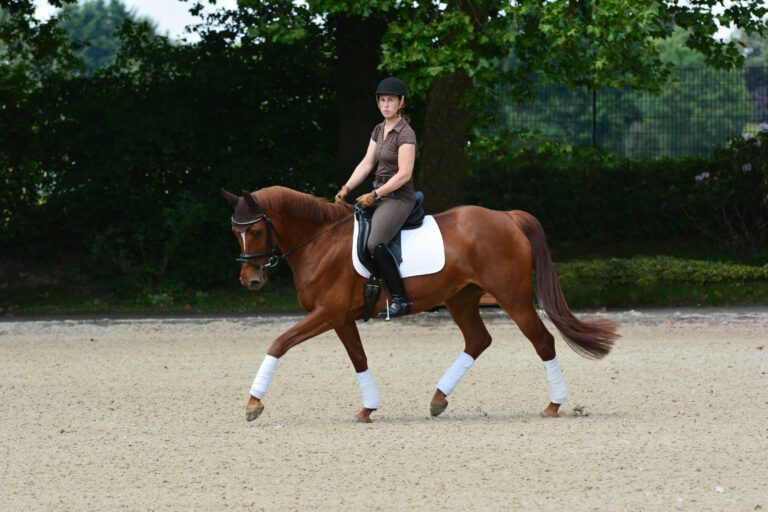 The basis for all riding: without flexion there is no bend, and without bending there is no straightening and gymnastics. So it’s important to learn