Equine Evolution: The Historical Role of the Horse, and Their Impact Today

By today’s standards, horses seem almost to be a luxury; something associated with wealth and affluence. A hobby of sorts, for those who can afford it; and a far cry from the role they once played within the timeline of horse history, where, that wasn’t always the case. Horses are a fundamental, essential component of human history, ever since becoming first domesticated around 50, 000 years ago, and horse history has shaped our own history in almost every way. And in some countries, that continues to be the standard to this very day. But regardless of purpose, regardless of how each animal was being utilized in the life of a man, each contribution was important, just as it is today.

Cut from a Smaller Cloth

The integral role that horses have played in the development of the modern world is, literally, immeasurable. In the United States, horses have become rather a hobby, or an interest, by today’s standards, but in various parts of the globe, cultures rely on them to sustain a variety of needs. From transportation to agricultural labor to participants in wars, the horse’s vast range of abilities and strengths has made this species of animal’s contributions to the development of man unparalleled, and thus, the topic of horse history remains an important one. 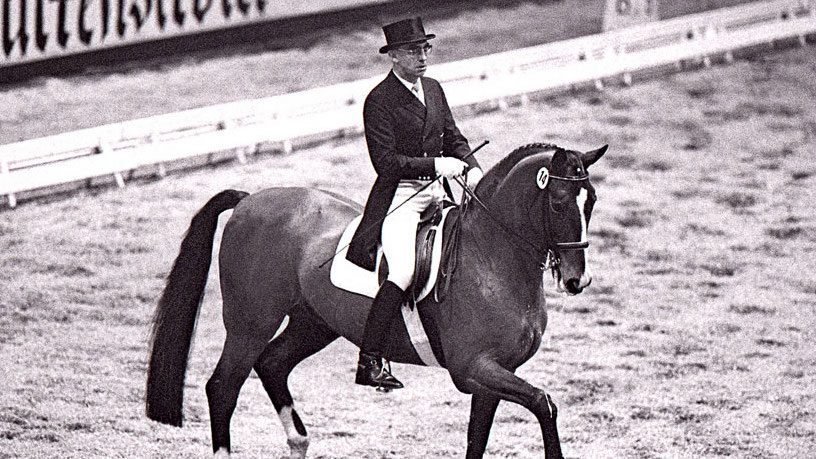 When delving back into the beginnings of horse history, unbelievably, horses have lived on Earth for more than 50 million years, though they were not domesticated by man until around 3200-4000 B.C. Evolutionally speaking, the first horses on the planet really didn’t resemble modern-day horses very much at all. This first species of horses, the Eohippus (from the genus Hyracotherium) was significantly smaller in stature, estimated to have measured a mere 4.2-5 Hands in height, and had an arched back with raised hindquarters. Also referred to as the “Dawn Horse”, this tiny species; the first ancestor of today’s modern horse, roamed about on legs that actually ended in padded feet, possessing four functional hooves on their forefeet and three on each of their hind feet—as opposed to the singular hooves we see on modern horses today.

From that point in horse history, natural selection genetically favored larger, taller members of this species as they were more capable of surviving when being hunted by massive predators. Their teeth also evolved, as did the loss of multiple hooves and footpads. Time saw their legs growing ever longer, a substantial increase in the size and thus the subsequent cognitive functioning of their brains, as well as teeth more readily adapted to graze. Horse history saw the species gradually evolving into the modern-day horse we have come to know and love today.

For years, scientists have debated the origins of horse history, having differing theories in regards to what and where, exactly, the true origins of today’s domesticated horses began. It had long been thought that the domestication of the horse originated in the western part of the Eurasian Steppe, although precisely where and precisely how has always been a topic of great debate. However, a recent study conducted in 2012 and funded by the BBSRC, German Academic Exchange Service (DAAD), and the Leverhulme Trust and conducted at the University of Cambridge has narrowed down a more exact location of the origins of domestication in the timeline of horse history, using DNA mapping and trace lineage.

One of the lead researchers who facilitated this massive undertaking was Dr. Vera Warmuth, a faculty member at the University of Cambridge’s Department of Zoology. Of the study, she noted: “Our research clearly shows that the original founder population of domestic horses was established in the western Eurasian Steppe, an area where the earliest archaeological evidence for domesticated horses has been found. The spread of horse domestication differed from that of many other domestic animal species, in that spreading herds were augmented with local wild horses on an unprecedented scale. If these restocking events involved mainly wild mares, we can explain the large number of female lineages in the domestic horse gene pool without having to invoke multiple domestication origins.”

The work conducted by Dr. Warmuth and her team has finally allowed scientists to pinpoint a more specific location as well as an explanation within the timeline of horse history and development for the diversity seen today by providing the first true genetic evidence supporting the theoretical, geographically restricted domestication origin points in the Eurasian Steppe. These genetic footprints evidence the tremendous female diversity which directly resulted in the later introductions of local wild mares into domestic herds, thus reconciling evidence which had previously given rise to conflicting scenarios.

So, How Were Horses Domesticated?

Upon close examination of horse history, we see horses first having appeared in Paleolithic cave art around 30,000 BCE, but the horses depicted in these images were wild horses that were hunted and then consumed. Taking a massive leap in history, about 6,000 years ago, on the grasslands of Ukraine, West Kazakhstan, and Southwest Russia, domesticated horses began breeding with wild mares across Asia and Europe, and for ages, scientists theorized that the Botai, or other inhabitants of the Eurasian Steppe, became the first people to tame the wild horse, Equus ferus. This theory, in the area of horse history and domestication, implied that horses were domesticated in a similar manner as other livestock, such as cows, goats, and sheep, however, essentially beginning in a singular area.

The same groundbreaking studies, however, found upon close analysis a total of 18 different lineages from a variety of locations in Europe and Asia, indicating that this process of domestication was not, in fact, happening in a singular area, but all over these massive continents. The sheer abundance of locations where this was occurring naturally, in this massive expanse, serves as a testament to the importance of horse history and to how significant the influence of horses was for the various different peoples and cultures living on these continents; all of whom recognized the importance and potential of these incredible animals.

Oh the Places We Will Go

The various uses for these domesticated animals and the implications of horse history; the influence that their role would have on the development of humankind is, unprecedented. Originally, horses were only hunted and then consumed. However, upon domesticating the species, men found that they could use them for farming, to travel, as mounts in warfare, as a means of hunting, and also for competition, sport, and pleasure. The impact that these various uses had would go on to impact other areas of development; for example, communications. Being able to deliver mail in a more efficient manner, impacted humanity’s communications, which would in effect go on to impact other areas of focus such as the military, the sciences and medicine, and even the entertainment industry. Horse history and the overall influence of this species is not often truly appreciated.

The horse has come a long, long way in terms of appearance, purpose, and even appreciation. Today finds horses still being used as laborers in some countries as consistent with some years found in horse history; pulling plows, being used for transportation, being used on ranches and farms to herd cattle, and for maintenance, and many people still utilize horses to hunt. However, in the United States, horses are used more for sport. They compete in disciplines as varied as Hunter/Jumpers to harness racing to Reining to Barrel horses, and so many more. Further, more recent years have seen a shifting Western philosophy that has begun looking at the needs of the horse and seeking to fulfill those needs.

My Horse, My Partner

Horse history has shown us times where horses were (and in some countries, very much still are) treated as mere possessions. They are worked, exploited, and used until they are no longer of benefit to their respective human, and then they are simply discarded. Their needs are not deemed worthy of consideration, past the needs that need met to fulfill their purpose, and they are simply whittled down into submission. Modern-day thought has really started to take into account the needs of each unique animal, and equestrians treat their counterparts more as partners than as subordinates. This is a far cry from perceptions previously found in horse history, and has seen incredible advances in the world of horsemanship, impacting incredible change in both the English and Western worlds alike, and resulting in happier, healthier horses, capable of far more incredible things.

A Hope for the Future

Horse history documents times long ago, where horses were treated as mere food source, up until present day convictions, with the paradigm having shifted from what was once simply a beast to be tamed—a creature whose spirit had to be broken to be controlled into rich, rewarding partnerships between horse and rider, who knows what the future holds for these incredible creatures? The hope is that humanity will continue to celebrate horse history and the incredible role these animals have served in the makings of our own stories. They are a species like no other, whose existence is the foundation upon which modern humanity has been built. The sky is literally the limit with horses, reined only by the limits of our own creativity.

Horse massage, acupressure, and more to build your relationship

Have you ever tried massage, acupressure, stretching, or any other ways to strengthen your relationship with your horse when you’re not riding? Again and again

The Ultimate Guide to Bridling Your Horse Correctly

Choosing the right tack for your horse is just as important as a regular dentist and farrier checkups because a non-fitting saddle or bridle can cause much damage to the horse.

A horse bucking because he feels good is one thing but bucking under saddle is another, ranging from fairly harmless little bunny hops to terrifying bronc shows.