Lateral Exercises in Dressage: From Leg Yield to Half Pass

The first-time seeing dressage in action is much like watching magic. The complexity and discipline required to execute such intricate, sophisticated patterns and maneuvers is almost unbelievable. So, what it is that allows competitors to showcase such fine-tuned athletes? The key to that answer begins with suppleness and bend, and a critical component of that training involves an understanding of lateral movement.

What is Lateral Movement?

In the discipline of dressage, lateral movements (or lateral flexions, as they are also referred to within the realm of the equestrian sciences) are maneuvers that require a horse to move in a sideways motion, such as the half-pass or the leg-yield.

To accomplish these maneuvers, the horse must maintain a forward-moving momentum, while also giving to, or moving away from the pressure of the rider’s leg, resulting in a diagonal line. These maneuvers can all be performed in various forms of the three gaits of walk, trot, and canter.

Back to the Basics: The Importance of Foundational Training

Foundations are critically important in any school of study; be it mathematics, language, the arts, or the equestrian sciences and horse training. For a horse to be able to learn and successfully elicit lateral movements, they must first be taught to move away from the pressure of a rider’s leg. If, for example, a rider is asking for lateral movement, but is putting pressure on both of a horse’s sides, he will not know what to do, or which direction to go, and lateral movement will be virtually impossible to accomplish.

Why Include Lateral Exercises in Daily Training?

Regardless of discipline or specialty, there is a place for lateral training exercises in any horse’s daily training regimen. Of greatest importance is that of leg pressure, as horses should learn to always move away from the pressure of a rider’s leg. Additionally, lateral exercises improve a horse’s suppleness, resulting in a more flexibility and far less rigidity of any given movement while aiding in the development of muscles and endurance and strength training.
Finally, the dressage horse will be expected to perform specific lateral movements and maneuvers in the show ring, as these specific movements will be included within their patterns and will greatly influence their overall score.

It is important to remember that there exists a negative relationship between lateral movement and impulsion. Requiring a horse to move sideways will have a negative effect on the amount of energy, or power, the horse has available with which to engage. Further, if not taught correctly, a horse can lose not only power, but also the degree to which his body remains balanced and supple. This can even result in damage to a horse’s body, or injuries, over time.

The various types of lateral movements showcased in dressage require that the horse’s body and legs travel down different tracks or in different directions. As a result, individuals will refer to these maneuvers as being of various tracks, depending on the direction that each part of the horse’s body is moving in.

There are five different, primary types of lateral maneuvers in dressage. They are listed as follows:

The leg-yield is typically taught to a horse, and subsequently practiced, nose-to-the-wall; however, in the arena, spectators will typically see it ridden across the diagonal. In this maneuver the horse’s body is relatively straight with all four feet scissoring, or crossing sideways, and his shoulders leading.

The Shoulders-in is on three tracks. The haunches of the horse remain parallel to the reference line. The hindquarters are almost straight, as if the horse were moving away from you in a straight line, and the curb is through the rib cage. This maneuver should collect the horse and balance him towards the quarters.

The travers, haunches-in, or tête au mur is the first movement we teach to a horse where he must bend in the direction of the line of travel. Executed correctly the horse should be bending its hindquarters slightly to the inside of the arena, away from the arena wall, so that the horse is bent in the direction of movement.

The renvers involves lateral movement with the horse moving on four tracks with the forelegs and hind legs crossing at a 35-degree angle to the wall while still on a path of forward travel.
The renvers is nearly identical to the travers with the difference between the two being merely a matter of which way you are moving the horse’s body, depending on your location within the dressage ring.

This can be a little confusing for some riders. Perhaps the easiest explanation is that while travers is head to the wall with the haunches out, renvers is haunches in towards the wall and then the shoulders shift out.

It is important; as trainers and riders and horse enthusiasts at-large, to remember that horses were designed for forward motion. Are they capable of moving laterally naturally? Of course, but too much work requiring lateral movement can be incredibly damaging, from a structural standpoint. As a result, utilize these exercises purposefully, but sparingly, to avoid any unnecessary stress to your horse’s feet and legs.

The lateral movements most commonly showcased in the dressage arena serve as perfect complements to an already incredibly beautiful discipline. These exercises not only work to develop strength and suppleness during training, but when executed correctly in the arena, these athletes are able to showcase the complexity and grace of a horse whose body is not only balanced, but in perfect harmony with his rider.

Naturally, movements requiring horses to move in a direction other than simply forwards should be used with consideration so as not to damage the horse’s natural structure and carry, but when taught correctly, used with fidelity, and executed with mastery, lateral movements result in an awe-inspiring experience that truly works to do justice for the foundational arts of the modern-day equestrian.

If you want to learn more about lateral exercises, check out our dedicated courses here!

Staying Motivated when Training Horses: 5 Tips you Should Know About!

When training horses, staying motivated at all times can be challenging. Here are some tips to help you reach your goals and be happy in the saddle! 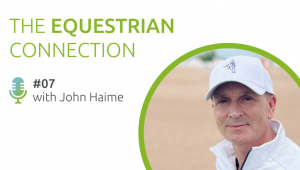 John Haime is a human performance coach, who helps you to bring the best out

Competitions can and should be fun for horse and rider and also a great addition for training and overall progress. This article wants to inform you about how riding a dressage test can be successful and fun.

Scott Cieslar has 20+ years experience as a professional nutritionist, receiving an MSc in physiology