The School of Légèreté: What Makes it so Special?

A dressage philosophy that emphasizes lightness. What do Philippe Karl and his students do differently? A visit to a School of Légèreté course reveals how it differs from – and also is similar to – conventional riding methods.

What exactly is the school of Légèreté?

Most people have two answers: a man named Philippe Karl, and then they add, ‘Those are the ones that ride with high hands!’

Not entirely wrong, but not the whole story either. Philippe Karl and his ‘Ecole de Légèreté’ stands for a philosophy of learning. It is a school that promotes lightness which horse and rider can use in attaining the highest dressage abilities, but which also works in learning the fundamentals. Philippe Karl – who, incidentally, is married to Bea Borelle – founded this school of riding on the knowledge of the old masters. The rider should apply the lightest of aids. The horse should respond to leg and hand aids with lightness. That commands attention! Don’t all riders want to ride with such fineness?

What do they do differently?

The difference can be seen in the cooperation between the horse and rider. The methodology for the horse is organized into very small steps which can be built on one another, or likewise unbundled when something isn’t working. This leads to greater motivation in the horse. Bettina Siemer, licensed trainer for Philippe Karl’s Légèreté method in Vienna, explains it this way: ‘The result is a satisfied and willing horse who gains beauty and expression during the course of the instruction and doesn’t lose these afterwards, as is unfortunately often the case with other riding schools.’

Observing the horses in the course sessions with Philippe Karl, one sees lots of chewing mouths. No hammering or squeezing leg action from the riders. One does see active ears, a sign of cooperation. And also a few unpleasant instances of getting above the bit or falling apart. Because nothing is being artificially prettied up. There’s nothing to cover up a lack of suppleness; rather, one goes a step back. The basics must be done right. The work isn’t pretty, but it is honest and ultimately real, and becomes more consistent during the course of the training.

This training methodology represents, above all, the alternative path to advanced-level dressage. Ultimately, the goal is similar to those of conventional techniques. Philippe Karl, born in 1947, became instantly famous through the release of his courageous book, Twisted Truths of Modern Dressage. The book admonishes hyperflexion of the neck and other insanities being found at conventional competitions and training stables. Philippe Karl explains the weaknesses and contradictions contained in the conventional system of dressage training in precise detail. He even questions the crown jewel of conventional riding, it’s training scale.

This book shook – and angered – the dressage world. But it also kept some from understanding just what Philippe Karl and the School of Légèreté teach. It’s no bag of tricks, but rather a comprehensively thought-out system.

And this system is not only intended for leisure riders! Anke Ziegast is licensed as a trainer in Austria. Before her training in Germany, she rode in the youth dressage squad, competing at the Prix St. Georges level. She mastered the instruction, but the path was the wrong one for her. “My experiences in the dressage scene brought me and my horses to mental and emotional dead ends on a regular basis.” It was through Philippe Karl that she found a high-quality alternative to conventional dressage.

Philippe Karl rode in the Cadre Noir in Saumur, the French equivalent to Vienna’s Spanish Riding School, for more than a decade before going into business for himself. His School of Légèreté now has branches is several countries. The master himself teaches only those who are enrolled in his riding instructor course. In some countries, including Austria, these training courses have been taken over by his licensed trainers. Bea Borelle teaches in Germany, Sweden and Switzerland, whilst Sabine Mosen teaches in Austria and the Czech Republic.

No auxiliary reins are used at the School of Légèreté: no draw reins, no martingales, no side reins, not even while lunging. The horse’s mouth receives cues exclusively from the rider’s hands, and these should be as light as possible. Flash nosebands are not used. Many horses ridden in the Légèreté method wear snaffles with cheeks.

The rider uses a variety of hand positions: sometimes next to one another in the usual way, but sometimes in a diagonal position, or lifted, or with the wrists turned in such a way that the palms face upward. Why are the hands lifted? This way, the reins are acting on the corners of the horse’s mouth and not on the bars, which are much more sensitive.

The training methods of Philippe Karl are in line with the teachings of such masters as Xenophon, Baucher, La Guérinière, and Pluvinel.  Philippe Karl interpreted this from his own perspective and supplemented it with insights on anatomy and psychology.

Lateral exercises according to the Légèreté principles

What other differences are there? ‘The lateral movements, the moving of shoulder and haunches, are introduced much earlier in the School of Légèreté’, says Bea Borelle, but conventional trainers say ‘that’s too difficult, we don’t start that until we get to Medium tests’. In contrast, conventional dressage riders tackle extended trot earlier in their training.

You can see in this video, how lateral movements are being introduced by Philippe Karl in the training of his horses.

What Légèretè and conventional riding have in common?

Some exercises, on the other hand, are similar: working on shoulder-in, improving an extended trot through tempo changes, or improving rideability by riding through several transitions. Likewise, some of the aids are the same, such as slowing the horse through the leg being moved back.

Chewing exercises are an essential part of the training

The horse is taught the relationship between the mouth and the bit – first in hand, and later from the saddle as well. Commands for chewing, bending or extending the neck are therefore introduced.

Just as a leg aid is used to tell the horse to canter, these signs tell the horse: “Extend!” Here, for example, pressure is evenly applied to both sides of the mouth. The horses learn to differentiate. The rein aid for “Lift the head, yield at the poll“, to bring the nose line on or in front of the vertical, is a quick sequence of gentle impulses to the mouth. Specific requests for chewing can also be given.

These rein aids, known as “chewing exercises”, are for developing ease in hand, the flexibility of the neck, extension, and yielding at the poll.

This brings clarity to the scene described at the beginning, when course instructor Bea Borelle interrupted an exercise to remind the horse what to do. Specifically, the horse can be told: “Do this, please, now this, please!” Fittingly, one of Philippe Karl’s mnemonics is “high amount of learning per kilometer“. If the horse had not understood here, the rider would have dismounted and shown the horse the required rein aids again from the ground. This going back a step and making it understandable to the horse is typical for this methodology.

It is actually one of the most frequently heard questions in school courses. However, in Bea Borelle’s course it’s often the instructor herself asking this question. Every student should be able to explain what they’re doing and why. An example: extension posture. A typical course question is ‘How many reasons are there to ride a horse in stretching frame?’ Bea Borelle’s script for the training of riding instructors contains twelve answers, including: so as not to block the hindquarters in difficult lessons, in order to develop the length of stride, for rhythm and bit contact, and so that the horse seeks contact with the rein.

You can learn more about Philippe Karl and the school of Légèreté on his personal page. You can also find our video trailers on our dedicated YouTube playlist. 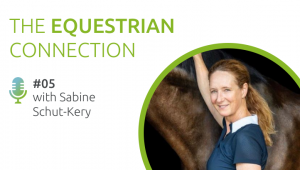 In this podcast episode, we are talking to Sabine Schut-Kery, the newly crowned Olympic Team

The Real Definition of Impulsion in Dressage

Correct impulsion isn’t only meant to look nice in the dressage arena, it’s also a requirement of correct dressage training.

Are bandages or riding boots better to protect our horse’s legs? Or perhaps it would be healthier not to use them at all?

The discipline of show jumping is one of the three equestrian disciplines found at the Olympics, World Equestrian Games, World Cup Series, and the Nations Cup Series.