Show jumping is a sport born of necessity. In 17th century France, the sport of fox hunting was relatively straight-forward. With open fields and long wide expanses, hunters were able to hunt freely on horseback, being met with few obstacles along the way. However, 18th century France saw the introduction and subsequent enforcement of the Enclosure Act, forcing hunters and riders to now adapt their approaches as they would have to hurdle a variety of fences along the way. The question at that point pertained to the best method for getting horse and hound over those fences. 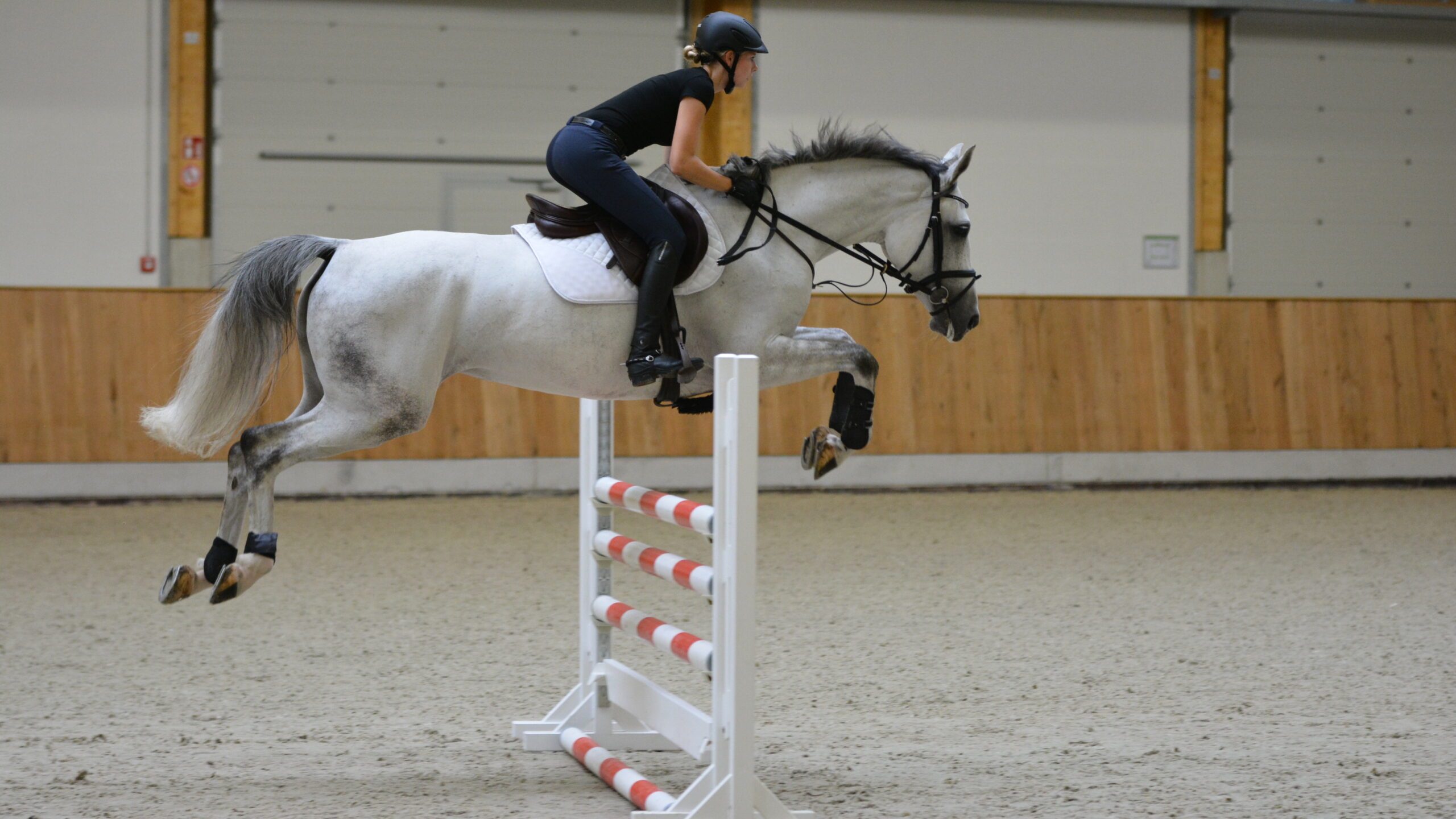 Originally, riders developed a technique whereas they would lean far back into the saddle, pitching their legs and feet up towards the horse’s shoulders, and pulling back precariously on their reins. Although awkward and clumsy, initially, it got the job done. Cavalry schools of the 19th century, such as the schools at Pinerolo and Tor-di-Quinto, both located in Italy, as well as the French school located in Saumur and the Spanish school in Vienna all focused upon the backward seat when jumping, and the long length stirrups found in steeple chasing. This style of riding is best seen in the artwork of that period, illustrating the awkward position of the rider as they took horse over fence.

This style of riding gained a massive following, the popularity of which saw the introduction of show jumping into competitive equestrian sports, taking the event into competitive arenas around the world. However, in its early stages, the lack of balance and control was not lost on riders, and finally, an Italian Instructor by the name of Captain Federico Caprilli, revolutionized the sport by suggesting that the rider assume a forward position, and as a result, the sport saw the introduction of the forward seat. This worked to not only improve safety, but also significantly impacted a horse’s speed in that this new forward position allowed both horse and rider to assume and maintain a far higher degree of balance, allowing the horse to maintain his forward momentum as he navigated the obstacles around the course.

There is a reason show jumping is one of only three equestrian events featured in the Olympics. It is a sport requiring the highest degree of athleticism, precision, speed, and agility. Few prospects have what it takes to advance to the highest level of show jumping competition. Jumping saw its introduction to the Olympics in 1912, in Stockholm, Sweden. At that time, the rules that existed were arbitrary at best, with judges allowing the competition to continue as long as they deemed fit, and with no penalties for faults such as knockdowns and refusals. Some judges marked competitors based upon the difficulty of the obstacles, whereas others were judged on their style. Each country created its own rules for the sport, and it wasn’t until the formation of the International Federation for Equestrian Sports (FEI), that a single, unified set of rules was adopted for show jumping competition.

The difficulty of each jump is contingent on the size and type of the obstacle. At the competitive level, courses present a variety of different jumps so that competitors can showcase their horse’s skill, athleticism, and technical ability. Listed are the most common types of jumps, followed by a brief description of each.

A vertical is a jump where poles or planks are stacked one atop another. There is no spread or width involved when clearing this type of jump, merely height.

Cross Rails are a type of obstacle where two poles are crossed next to one another, creating an “x” formation. They are incredibly useful for training horses, as they naturally teach horses to jump in the center of the rail itself, given that where the two poles cross is the lowest point. These types of jumps are rarely seen in show jumping competition.

The Oxer is an obstacle that features two verticals that are spaced closely together, creating for a wider jump. They can consist of equal or differing heights, and are also referred to as “spreads”.

The Triple Bar is just that; three bars. The bars themselves are spread, however, with three different, graduating heights.

Walls are literally what the name depicts; walls. They are made of soft bricks so that they fall easily if touched by the horse. This not only helps to prevent injury, but also allows the judges to see even the slightest fault.

Banks are jumps that go from one level to another. Banks requiring an uphill approach are safer and easier for horses than those requiring a downhill approach. Modern show jumping courses do not feature this type of obstacle normally.

A Bounce is a very difficult type of fence and is rarely seen in advanced show jumping competition. It is referred to as a bounce, as there is not enough room for strides in between one obstacle to the next, hence the term a “bounce”. A horse has only enough room to land from the previous obstacle before immediately jumping to clear the next. These formations can consist of two fences, or even more. The more bounces the horse and rider must clear in succession, the greater the difficulty.

A Liverpool is a show jumping obstacle where a pool of water has been placed underneath a vertical or an oxer, creating a more stunning visual appearance while widening the jump and creating a greater level of difficulty.

A hogsback or hogs back is an obstacle consisting of three or more uneven poles, each at varying heights, with the highest pole assuming the center placement. They are most commonly seen at more advanced show jumping events, given the high degree of difficulty required to clear them.

A brush fence is an obstacle that consists of a lower wall topped with a section of brush. These are most commonly associated with steeple chasing, but can be found at most professional level show jumping competitions.

A combination is just that; a combination of horse jumps set up in a row. The difference between a combination and a bounce is that with a combination, there is enough room for a horse to take one or two strides in between jump, whereas in a bounce, there is not.

Jokers are incredibly difficult obstacles as they consist of unpainted poles or boards. Their lack of distinction makes them more difficult as it is harder for the horse to judge their size and position. Although they are not allowed at some show jumping competitions, it is not uncommon to see them at the advanced level due to the caliber of difficulty.

Each type of show jumping obstacle requires the horse to clear it a bit differently, which is why providing courses with variety is so very important. Only the advanced horse will be able to approach each obstacle with ease, while maintaining a consistent cadence and still being able to showcase their individual style.

Getting Started with Show Jumping

Beginners who have never been involved in show jumping before, or who possess very little show jumping experience will need instruction regarding riding a hunter/jumper prior to asking their horse to clear any obstacles. It is crucial that the rider possesses a solid understanding of show jumping to effectively teach his or her horse how to clear obstacles. They can obtain lessons at a local facility or network, reaching out to local friends or competitors to find someone to work with them, but there is no way to instruct a horse without first possessing this show jumping knowledge yourself.

After obtaining knowledge and experience show jumping yourself, or for those of you who already possess experience show jumping, you can begin working with your horse. This should never be done haphazardly. Show jumping is not an activity where you should assume a “Go for it!” attitude. Setting up a four foot wall and racing your horse towards it, with hopes that he will simply leap over it is not only careless, it is irresponsible and could literally be fatal. As the facilitator, like any skill, you need to introduce your horse to the task basically and then build upon that fundamental knowledge developing more advanced abilities.
There are many different exercises and methodologies that exist for this training regimen; however, there exist a few fundamental exercises that almost all people agree upon. The use of ground poles and cavaletti are essential in teaching your horse to maintain rhythm and cadence in approaching an obstacle. Beginning with a single pole, a horse should start by trotting and then cantering over it, with the introduction of more poles to follow. A short, simple cross rail should be the first actual obstacle that you ask your horse to clear, with many trainers preferring this done, at least initially, on the line. Eventually, height can be added alongside the introduction of new obstacles.
No event showcases the beauty and the natural grace of horses quite like show jumping. Millions of viewers watch it every four years during the Olympics for this very reason. Born out of necessity as a means of hunting, and then adapted once modern fencing laws were implemented, this event has undergone many changes, and will likely only become bigger and better in the years to come. 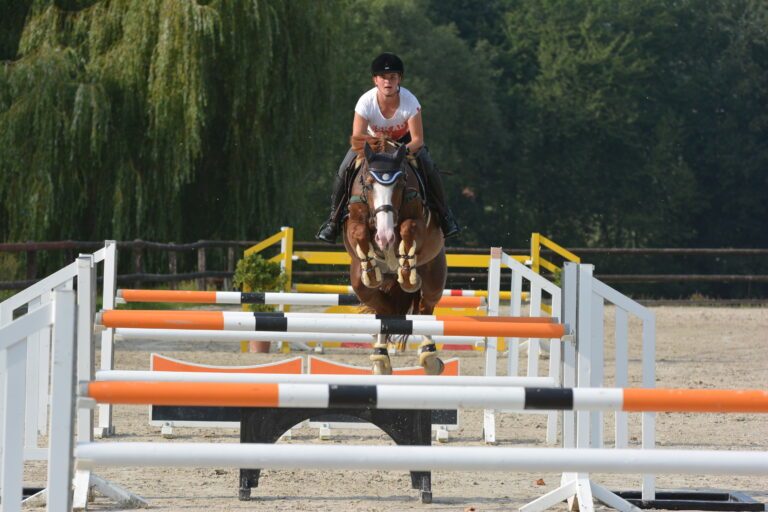 Preparation is half the battle – this also applies to jumping courses. Just going for it is not the right strategy here. It’s safer and

The Rider’s Position in Show Jumping 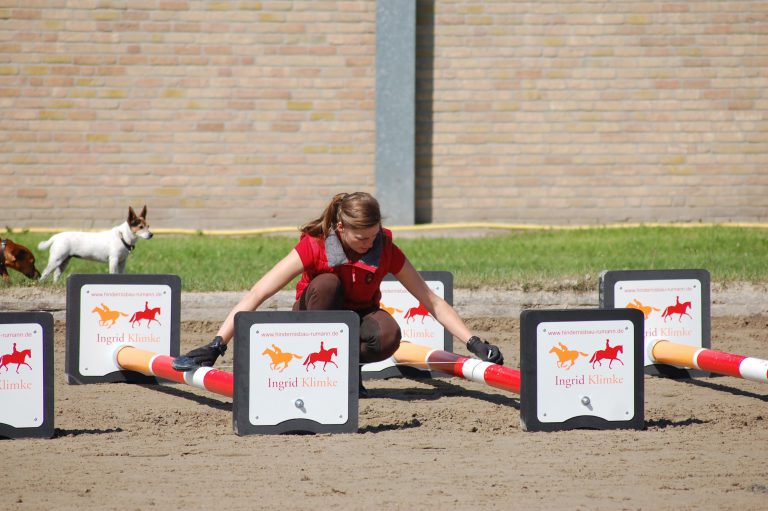