Basic Training of Young Horses: Lunging, Tying and Saddling for the First Time

There is great value to a successful start in the training of young horses. For this reason, Uta Gräf and her husband, Stefan Schneider dedicate a lot of attention to this phase.

Stefan Schneider is the one who handles the first steps of the training of the young horses at Gut Rothenkircherhof. Uta Gräf has often said that the basic instruction that her husband provides has saved her a great deal of work, because the horses that come to her subsequent training are calm and knowledgeable.

The use of a control halter

To start the training of young horses, Stefan Schneider works with a control halter. “I control through the nose and don’t put any pressure on the poll”, he says, therefore using this tool which has an additional flexible rope attached to the bridge of the nose. This halter can be seen in the first photo.
Its function is similar to that of a rope halter, but without a thin cord at the poll and without pressure-transmitting knots at the sides. “The poll is sacrosanct”, he says. He furthermore suspects that the young horses understand more quickly when just one point is addressed. He used to use a nose chain, as can be seen in the middle photo on this page. These days he prefers a rope on the control halter; “It’s gentler and, in contrast to chains, one can use it with any horse.”

Four important signals in the training of young horses

Learning to understand pressure on the nose

During their basic training, young horses also learn what pressure on the nose means. “They understand it this way: when I feel pressure around my nose, then I have to do something”. He uses the control halter to teach them to rein back and go forward. This is a very important building block for all future training of young horses. It’s especially important that the horses learn these signals before they are tied for the first time. This prevents accidents.

These instructions are also essential for transport. A bit of tension on the lead that’s attached to the rope around the nose on the control halter means go one step forward. If Schneider indicates a backwards motion, the horse understands that it is to take a step backwards.

Schneider doesn’t use side-reins for training young horses. “I don’t want to put the brakes on these young horses”, he explains. It can be confusing if the horse is sent forward with a kissing noise but is then held back in the mouth, particularly if it feels that the way ahead is not completely free. “They should first run free, they should learn that there is lots of room! It’s fun to just go forward”, Schneider explains. It’s important for the training that the young horses pay attention to his body language and his vocal commands.

Lunging in the round pen

The next step of the training is the lunging of the young horses in the round pen. Here they must learn to pay attention to Schneider’s body signals. “Pushing is forbidden! To understand why, it helps to observe horses when they are in the paddock. There’s no pushing against another of higher rank!” On the contrary, “The higher-ranking horse yields to the others with a waggle of his ears. We humans must adhere to this same code when working with our horses“. Clear rules are important to him.

Horsemanship basics in the training of young horses

As part of the training, he teaches his young horses to go backwards by showing the front of his body and walking directly towards them. If he turns and walks away from the horse, the horse is supposed to follow him. “Horses pick that up almost immediately!” He does this basic work and then his trainers take over. They use exactly the same body language; “that’s important!” These cues will become more subtle over time, because “That’s the way it will be with riding. If my body language needs to be exaggerated, then there’s a problem in the system.”

Tying is a difficult exercise

It’s only then that Stefan Schneider will tie the young horses for the first time. “After lunging is when the horse is warm and has released some energy.” He likes to do this in the stable, so that the horse has limited space behind him. For this the horse wears a wide halter with a wide, soft poll piece. The horse is tied by the halter ring. Stefan Schneider holds a second lead which is hooked to the control halter. “Here the horse must learn: being tied means standing still, don’t step back.” He wants to avoid at all costs that the young horse pulls back. If this happens, he can give the already familiar signal for ‘step forward’ through the controller halter, because rope around the nose on the halter isn’t used for tying – it remains supple and can be used to apply targeted pressure.

Using acupressure points between the neck and the transition to the shoulder can help calm the horses when they are being tied. “I let the horse have the feeling that we have all the time in the world”, he explains. You can find out more about the use of acupressure for horses in this training course.

Desensitisation with a saddle pad

The next step in his basic training for young horses involves sacking out, or desensitisation. The young horse learns to have no fear if a saddle pad touches its legs, flank, head or neck. “When a young horse no longer flinches at this, then I know I can saddle him.”

More and more horses with cold back

Stefan Schneider has observed that this step of the training has become increasingly difficult for young horses over the years. “There are more and more horses reacting sensitively to wearing a saddle and to being saddled.” He sees many young horses, who have already been broken in or for which attempts were made, being brought to him with cold back problems. But these days even untrained horses are more sensitive that they were a few decades ago. “Breeding has allowed us to have terrific sport horses which are nevertheless more sensitive and thin-skinned.” He therefore has to introduce the saddle in stages. He urges owners of young horses to use caution, especially when trying saddles for purchase. “Just one day of putting on and taking off several saddles in succession can make a muck of a horse for a long time!”

Training young horses on the long-reins

Before advancing to the saddle, the young horse learns to engage his hindquarters. For this Stefan Schneider uses a double lunge without guide pulleys. For the first saddling, he ties the young horse and holds in his hand a second line which is connected to the rope around the nose on the halter. “It’s important not to make it too tight“, he says. He doesn’t want the young horse to try to buck the saddle off – “I want to have the situation under control at all times.” He tightens the girth by degrees, using a wide girth with foam cross straps over the sternum that distribute the pressure over a large area. Then he lets the horse step forwards and backwards with the saddle on, as far as he can – after all, he’s tied. “This prevents cold back and meets all safety precautions, so that I can conclude the situation positively in a controlled manner.” The saddle can give the horse the “feeling of being closed in, which can lead to one of fear. But if I move it calmly and with control, then the fear goes away.“

Lunging a young horse with a saddle

After this, the next step of the training is to lunge the young horse with a saddle as well. This step is still far from its being ridden: at the Schneider and Graf stables, before someone sits on a young horse, Stefan Schneider takes the horse out using the double lunge line. Exactly how he does this, and which unusual method allows the young horse to first perceive a human in the saddle, will be discussed in a later blog article. 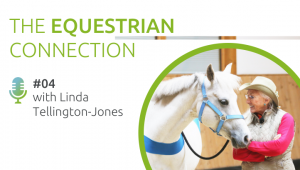 In this Podcast Episode we have the world famous Linda Tellington Jones as a guest.

Alizée Froment has shown like no other rider that it’s possible to use one’s seat in such a way that Grand Prix movements can be executed through bitless riding.

Nowadays interval training is used in many areas of equestrian, but most commonly in eventing and endurance. This is because high levels of stamina are required.

Lateral Exercises in Dressage: From Leg Yield to Half Pass

The first-time seeing dressage in action is much like watching magic. The complexity and discipline required to execute such intricate, sophisticated patterns and maneuvers is almost unbelievable.