Cantering along on a relaxed horse that makes rhythmic and rocking canter strides can be a heavenly feeling. Cantering or rather racing along and almost slipping in the corners of the arena, not quite so much. Find out about the biomechanics behind the canter of your horse and understand what to do in order to ride and sit the canter better and also how to improve this gait.

What is the Canter of the Horse?

The warmblood horse possesses three natural gaits: walk, trot and canter. Canter is the fastest gait and it can occur in different forms. Each gait has its own rhythm. The walk has a four-pace, trot a two-pace and canter has a three-pace just like a wiener waltz. This means that the rider has to give his aids differently, depending on the gait he’s riding.

In walk, the rider has to drive his horse forward with his left and right leg. This happens alternately and not at the same time. In trot, the rider uses his leg aids at the same time and in unison. In canter, it gets a bit more difficult because the legs lie in a different position on the horse’s belly and they are used in a different rhythm than in the other gaits: The inner leg stays on the girth and the outside leg goes behind the girth. They give the forward aid also in unison and at the moment when the hind leg that carries most of the weight pushes off the ground.

The Biomechanics of the Canter

In order to support the horse when riding canter, it is important to understand what happens in the horse’s body when it canters and how the biomechanics work. First of all, we distinguish between the left lead- and the right lead canter. Then we can take a look at the different phases of movement in canter.

If the horse is cantering on the left lead, the right hind leg initiates the canter by carrying the main weight. This is called the one-legged support. This is followed by the three-legged support when the right and left hindleg and also the right foreleg carry the weight and are on the ground. At this moment the inner hind leg (which in this case would be the left) carries the main weight because it is under the center of gravity. Then the two-legged support replaces the former leg position by distributing the weight on the inner hind leg and the right foreleg. Afterwards, there is a one-legged support with the left foreleg. Then comes the phase of suspension where the horse is off the ground with all four legs. Then we start again with the one-legged support of the right hind leg. During canter, the horse swings one diagonal leg pair more forward than the other which then results in a left lead- or right lead canter, depending on which hindleg starts to push off the ground first.

This gait requires the horse to be elastic because its three legs are on the ground which makes the spring-effect more resistant and that results in a less automatic swing than it is the case in trot. In canter, there is a rhythmic stretch and bend in the breast- and lumbar area. The back and stomach muscles are also essential parts that have to be activated in this gait.

As already mentioned, there is the left- or right lead canter which basically just means that either the left or right diagonal leg pair swings more forward than the other. But there is also the cross- canter that is not very desired. In this particular canter, the forehand performs a left lead canter while the hindquarter jumps in the right lead canter. Or the other way round. Then there is counter canter which is actually an exercise for more advanced classes but can also be a mistake when the horse is supposed to canter to the inside and not outside. In counter canter the outside hind leg swings forward.

In dressage, there are also different paces of canter that are divided into working canter, extended canter, strong canter and collected canter. It is in any pace required that the horse canter strides are uphill and controlled. In working canter the horse is supposed to move elastic and with impulsion in a clean three-pace. In extended canter, the horse doesn’t move any faster, but he extends its canter strides and therefore its frame and covers more ground. The strong canter has maximum frame extension and ground coverage and it is expected to be very uphill. In the collected canter, the strides are shortened and the horse jumps below its center of gravity without losing impulsion. This leads to a prolonged phase of suspension and a shorter frame which is necessary in order to ride a pirouette or flying changes. Collected canter and strong canter are asked for in more advanced classes.

In western riding the requirements for canter are a bit different. The canter is called lope and it is expected to be very slow and flat, so both horse and rider can ride comfortably like this for a while. Then there is the galopp which is mainly used in horse racing. It is ridden in the light seat and this type of canter is very fast and covers much ground. Mainly english thoroughbreds or quarter horses are used for racing galopp.

Different Requirements According to the Discipline

Depending on the discipline, there are different requirements for canter and how it should look like. You do not expect the same kind of canter from a dressage, a show jumping or an eventing horse.
In show jumping and eventing, the canter is expected to be fast and agile but also uphill and with a clean three-pace. It is also ought to be controlled so a clean flying change can result from it. In western riding the horse’s canter should be very comfortable and soft to sit so the horse must make very flat canter strides and move slowly. In dressage the horse should show a very expressive canter by having much hind leg- activity and shoulder- freedom in canter. The horse should canter with a strong uphill tendency and with a long phase of suspension that only adds to the cadence and positive tension within the horse.

Even though many riders claim that canter is much more comfortable to sit than trot, there can occur several other difficulties when riding canter. The main problem for most inexperienced riders is to strike off in canter from trot or walk. They find it hard to get into the rhythm which is not very convenient because canter is all about rhythm.

A common cause for a horse that doesn’t transition from trot or walk into canter is the lack of stability in the rider’s seat. If the rider tends to lean forward while giving the aids to canter, most of the weight lands on the forehand and thus brings the horse out of balance. A horse that is out of balance will also most likely start to canter (or rather run) in a far too fast pace. That way the horse tries to regain its balance. But it is also possible that the rider gets behind the movements of the horse by leaning too far behind and hence also interrupts the flow.

Another problem can be a misunderstanding between the horse and rider when it comes to the aids that initiate a left- lead or right- lead canter. It can happen that the horse strikes off in canter; but on the wrong lead or even in cross canter. The cause can be a rider that “drives” his horse into canter. In these cases the horse is trotting far too fast because he doesn’t know how to interpret the rider’s aids and eventually falls into canter however in a very uncontrolled manner that can lead to the wrong canter. It is important that the rider only gives the canter aids when the pace is controlled and the horse is attentive and has the possibility to listen to the aids and sort out his legs and body in the process. The rider initiates the canter by using his outside leg because the horse uses his outside hind leg to push off the ground and to initiate canter: If it’s the left-lead canter, the right hind leg starts to push off the ground and if it’s the right-hand canter, the horse starts off push off the ground with the left hind leg. It is often recommended that the rider flexes his horse to the inside of the arena in order to support him not to land in counter- canter or cross- canter.

Exercises That Can Help Improve the Canter of the Horse

Not every horse has a naturally good canter. Some horses have a very flat or rather downhill canter. Other horses tend to run away instead of jumping the canter strides with rhythm and cadence. And even if the horse has a canter that is very good in quality, there is still the difficulty to collect it: So how can you learn to collect your horse’s canter best?
First of all: Not every horse’s exterieur is fit to develop an astounding Grand Prix worthy canter. If the shoulder is steeply angled or the legs are very short, the horse won’t be able to show a spectacular, ground covering canter but it is always possible to improve the canter within the horse’s limits.

As you can see; canter is quite the challenging gait to ride and many mistakes can be made in the process. But it is also a very versatile and exciting gait that can be a lot of fun and that can be included in your training in very different ways.

Lunging training over poles and Cavaletti is a particularly worthwhile exercise: your horse is stimulated to push off with more intent.

Riding a Correct Dressage Halt: How to Score Points at Competitions

There’s one thing that can help you collect extra points at your next dressage test: riding a good dressage halt! That’s because a good halt counts as much as other “more difficult” dressage skills.

The rider has three aids that connect him to his horse and that serve as means of communication: The leg aids, the weights aids and the rein aids.

As an introduction, here are three tips from Kathrin Roida on how you can exercise your horse, for both beginners and advanced riders.

Injuries and ailments can – literally – get under your horse’s skin. These are often associated with side effects that affect not only the horse’s appearance, which makes good horse wound care all the more important. 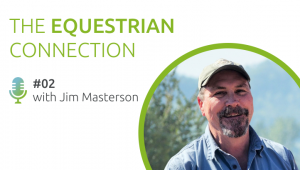 Jim Masterson is known as the founder of the Masterson Method. As a Horse-Massage-Therapist he